Has fine art gone to the dogs? The answer is both yes and yes.

“Yes,” when you consider the $590,000 price that the high kitsch ‘klassic’ “Dogs Playing Cards” drew at a New York auction house in 2005. And “yes” because since man first felt the need to express himself through art, great artists have regularly chosen to feature dogs in their work.

From cave paintings in Lascaux, to Ancient Egypt’s depictions of Anubis, to masterworks painted by Rembrandt, Renoir, Seurat, Warhol, and Hockney, dogs have frequently ended up in the frame and stealing the spotlight.

One artist who has learned to capture the many moods of our best friends, and the love their owners feel for them, is fine art photographer Jesse Freidin, a recent Santa Fe transplant. Jesse, a published author of the 2017 book Finding Shelter, is an award-winning pet portrait photographer with a national reputation. His commissioned high-end pet portraiture hangs in more than 100 private collections around the country, and his work has been exhibited in numerous galleries from coast-to-coast.

Like many LGBTQ transplants, he has found his footing with help from a few old and a number of welcoming new friends, including Santa Fe Realtor Mark Banham.

Pursuing a Passion, Finding a Calling

For Jesse it was a process of elimination followed by illumination. A casual interest in photography began during his childhood in Boston, when he started taking snapshots of his friends and family with a well-worn Polaroid. As time passed, he went to college, where his passion for the medium grew, along with an impressive collection of Polaroid cameras, some of which are on display in his Santa Fe studio.

After college, Jesse relocated to San Francisco, where he enrolled in a photography class at City College. The course turned out to be a life changer. “I realized I didn’t love anything more than holding a camera and that I wanted this to be my job,” Jesse says. “This is all I wanted to do.”

After completing the city college course, Jesse landed an internship working for a family portrait studio where he discovered something about himself. “I don’t like families or children, at least not as subjects. It just wasn’t for me.”

One thing Jesse knew that he did like, however, was dogs, though he wasn’t immediately sold on the idea of making canines his muse. “Contemporary pet photography felt cheesy to me, so I wanted to make sure I did it right,” he remembers, but decided to give it a try and did a photoshoot with a friend’s pug. “It blew my mind,” Jesse remembers feeling when he realized he’d found his calling.

After 12 years of being in the business of creating unique animal portraits, he’s developed a gradual process which lets him get to know both his clients and their animal companions before moving forward into a photoshoot.

“We chat about what’s important to them and to their dogs. I find out what their dog means to them, what their story is we plan the session together. I almost always go to my clients’ homes where they can be themselves and their animals can relax. I want their portraits to look real, to see weeds in the yard and chairs off-kilter. I never have a time limit and they have my full attention.” Jesse loves his job so much that he feels a personal investment in each photoshoot, and though he sometimes takes hundreds of photos, he usually only shares about 20 carefully curated images with the client and helps them select their favorites.

“I hope my clients are moved to tears and thrilled to own these beautiful prints that tell a story. I’m usually sad to see the images go,” he admits.
In addition to his photography business, Jesse’s love and understanding of dogs has led him into developing publishing ventures. For the past several years, he has been working with co-author Dr. Robert Garafalo, an adolescent medicine specialist who has dedicated his career to working with HIV-positive kids, on a forthcoming book titled When Dogs Heal: Powerful Stories of People Living with HIV and the Dogs Who Saved Them (published by Lerner Publishing Group, 2020).

From City Stress to Isolation to Perfect Middle Ground

With his business plan in place, Jesse went about getting his name out there and finding clients. Initially relying on visually-based low cost social media posts, he added to his outreach plan by presenting small pop-up exhibits of his photographs. “In San Francisco, I usually had at least three shows going on at all times. Usually in home stores and high-end pet stores.”

But while his business grew in California, he found life in San Francisco and Los Angeles becoming increasingly stressful. So he moved to a forest in the Berkshires, which proved to be too much of a ‘good’ thing, even for an introvert. “There was no community, LGBT or otherwise,” Jesse remembers feeling. “It was a bit too quiet for me.”

Eventually, Jesse decided to move back west. But this time to the smaller, less expensive, and more livable community. “I had done many cross-country drives through the years and was always impressed with Albuquerque and Santa Fe,” Jesse said explaining his decision. “After being in San Francisco and LA for years, I was ready for something slower. Plus, no one can afford the big cities anymore,” he added. “I need my space and my creative community.”

Just Right for a Working Artist

Outside of its workable size, affordability (especially when compared to San Francisco and the East Coast), and livability, one of the key things that drew Jesse to Santa Fe was its art scene and community of upbeat, hardworking artists.

“I’ve moved a lot before and wanted to be in a community of working artists, ones who were actively making work. I also love being a part of the small business community which thrives here in Santa Fe.”

Santa Fe also turned out to be the antidote to Jesse’s boredom in the Berkshires. After moving here full-time, he’s joined a handful of networking groups, he’s become an official sponsor of the Santa Fe Animal Shelter, big supporter of Española Humane Society, volunteered for Santa Fe Pride and set up a photography studio on Lena St., across from Iconik coffee house, which he frequently opens up for tours on Sunday afternoons.

Bonding With Banham & Maddie, his Lab

Most importantly, Jesse recently made a major investment in the Santa Fe community – he bought a home. And like many homebuyers, Jesse has struck up a friendship with Realtor Mark Banham, who serves as an unofficial welcoming committee to LGBTQ transplants finding their footing in Santa Fe.

They met and quickly because friends who share a deep support for the Santa Fe Animal Shelter. Better still, Mark recently became a client, with Jesse visiting the Realtor’s own home for a day-long session with Mark and his beloved 12-year-old Lab, Maddie.

“Maddie is Queen Bee and the soul of my home, and it was crucial to hire someone that understood the importance of coming into a sacred space and and gently fitting in and then having the ability to capture those special moments through the eye of the camera. Typically, she doesn’t like having her photo taken, but Jesse knew what to do. He followed her around a bit, spent time in ‘her’ spaces and got to know her. He really had a calming effect on Maddie,” Mark says. “Jesse was able to do this being the kind gentle soul that he is, along with his years of experience with the camera and compassion for our beloved four-legged fur babies!”

He added that Jesse appreciates the bond between dogs and their owners, especially those with older dogs, where the relationship has deepened through the years.

“At Maddie’s age, she’s starting to slow down and I know she won’t be with me forever. These beautiful black and white images capture our relationship. I love them now, but I know they’ll mean even more to me in the years to come,” Mark says.

“From the initial consultation through the session at my house to sitting down at Jesse’s studio to review the images of Maddie and of us together, I could tell Jesse wasn’t just doing a job, but was really passionate about his work.”

To see more of Jesse’s work or to set up a quick Creative Meeting in his studio, visit https://www.jessefreidin.com/. He’s now offering clients of Mark Banham and members of the Gay Santa Fe community 25% off Photography Sessions.

Thinking about purchasing a vacation home or relocating to Santa Fe? Reach out to Barker Realty Broker Mark Banham to learn more about real estate opportunities in the Santa Fe area as well as the cultural and social opportunities available in this unique, welcoming community. 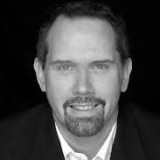